FIXED PRICE PLANS FOR YOUR HOME EXTENSION
PRICES STARTING AT  £195.00

CONTACT US
Find answers to common home extension issues, questions you may have, planning permission and building regulations questions.

Poor quality GRP roof over new house extension. What can I do?

After telling the builder I'm not willing to accept a patch-up on a new roof install and that the roof would not pass building control (see new pictures) it was obvious nothing was going to be done.
I have had to tell him there's nothing else for him on the project, no way I could hand over any more money.
Not sure what I can do to claim any money back or get the work investigated, Hoping I can get the work done and break even with the money I have held back.
New pictures are above the cavity walls below a cold deck, apparently, this is fine and the timber will act as a thermal barrier? The blocks of insulation in the cavity just rattle around.
I'm not even sure I should worry about moisture or wildlife getting in?
Currently having a rear extension built and this is the state of my brand new GRP roof. The builder was recommended by a friend and was not the cheapest quote but I had been messed around and ghosted by two other builders and wanted to get work started.
Happy with the brickwork, great match, plumb & square, bricklayer has done well.
Then comes the roof.....
I wanted and was quoted for a warm deck GRP flat roof.
On the first day, I walked in, straight away I notice the openings for glass are not the right size and off the centres that had clearly been marked on a drawing.
On the second day, Eaves look like the Stratford velodrome, from every angle.
These got sorted but all the timber work looked rough and of course, the timber is to blame, it's come out the suppliers like that.
Now they have laid this GRP covering straight on, No insulation so no "warm deck" so have to have a cold deck but they have not put vents at the back against the house, There's no insulation above the side cavity walls and is now inaccessible so just open voids? Is this ok?
These pictures show the state of the roof, looks terrible to me but I have been assured they will sort it "It was too hot the day they layered it".
Why start if it's too hot?
So the question is, can this roof be saved or should I demand I be refunded or it is rebuilt, I have paid out a lot of money and I just can not see how they will sort it out without it being a patch-over job.

REPLIES:
BY:
This is horrific job the deck should be osb3 or a P5 deck with GRP or it will de laminate. This one of ours is a little sixty but should look like this, this is a warm deck
Ashley Manoff
What a mess, as said looks like they tried to do it in one coat.
It should have resin to bond the and soak the matting with a grey top coat.
It will leak if left.
It could be sanded all over and done again. Should be OSB decking too.
Terry Lloyd
Since they started selling grp in the merchant's everyone thinks they can do it. This is a prime example. He should pay for a proper roofer to come and put it right. Then you’ll see what sort of builder he is
Martin Watts
This is one of the worst GRP installs I have seen. This guy clearly doesn't know how to install the matting. He also has not used enough resin as you should not be able to see the fibres.
Vinny Parmar
Vinny Parmar I fear your use of installs is too polite to them. This is not an install but a complete pig's ear clearly of someone that has no clue how to use the product, at least I hope that’s the case as if they do it actually makes this even worse. This will be as watertight as the titanic was buoyant. This gives the trade a bad name for people like this!
Ashley Manoff
I tend not to comment on these types of posts but this is the worst I’ve seen. Draw them into admitting mistakes in writing (text or email) and build a really good case for yourself.
Hopefully, your builder will back you and you can get an independent surveyor, I doubt building control will pass it either - re ventilation and warm deck spec
James Zain Alderson
No, the roof can absolutely not be saved. It can be bodged with a dodgy overlay system but why should you settle for that?
The matting has not been consolidated at all and have they even used resin or just top coated the whole roof?
This needs to be completely ripped off and done by a proper roofer!
There are so many ‘roofers’ OR ‘builders’ who do a day course on the GRP or EPDM and then go out and ruin people’s roofs.
Reggie Norman
Can’t believe no one spotted that they didn’t chase out for lead flashing and remove the mortar between bricks !! That’s why I always check any tradesmen's work before they get paid … ask for a full refund or strip it all and redo it right !!
They’re not roofers!
MeMoo Kashef
If the roofers are subbies to the builder, it's for the builder to put right to your satisfaction within the agreed price. If you appointed the roofers, it's for you to sort out. And yes, it needs putting in the skip and starting again.
Alec Smith
Barry Hedges the one thing we all know about GRP is that it does not like movement. Most of these people doing GRP go and buy it from places like Selco and have no idea about the correct moisture content etc which is why people have so many issues. They don’t put enough supports in so when the timbers shrink the GRP cracks
Stacy Owens
That's rough.
And they knew how bad it was when they applied the colour coat, they are chancing it. Are the roofers the builder's recommendation or contracted? Unfortunately, if the builder has taken the full contract then the buck stops with him...
You could board over these now with your insulation and prep for a warm roof as originally designed I don't like cold roofs the abutment details are a pain.
Adam Smith
Strange it looks like nobody has sanded it down before putting the top coat, plus the patches are not done properly. The first rule is to check the deck temperature for hardner as too much is a disaster. Less resin has been used. They only can sand it down and lay a proper roof again on top of the existing one.
John Mcallister
I’m a boatbuilder by trade, mainly fibreglass boats. That's a pretty poor job and I would want it to remove and replace. You shouldn’t really be able to see the individual fibres or steps where the layers are. There isn’t enough resin and it hasn’t been consolidated down to remove the voids. Looks shy on the flowcoat too. If you look at this photo the fibres all kind of blend together to form a single skin.

James Bradburn
Neighbour built loft conversion on top of party wall. Now I have to join my loft conversion to his and the neighbour is not happy.
At what point does improving the loft space become an illegal loft conversion?
REQUEST A QUOTE 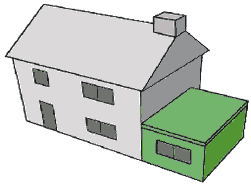